OP-AMP and Selected Resistor replacements, Improvements to the Current Sources

Before you get started you will need to locate your copy of the SCD-1/SCD-777ES Service Manual or download a free copy after googling for it. Copyright considerations keep me from posting it here or making it available for download.

This first round of mods are all focused on the audio board, and a word of warning before you consider doing any of these mods - you must be comfortable working with smd parts to a fair degree as you must replace most of the op-amps in the signal path. Secondly this must be done using static safe handling techniques, and the board removal and installation routines are sufficiently complex that mistakes can happen. Finally you must be able to reliably identify the orientation of small soic ics during replacement otherwise serious damage to the player could result.

The changes were all done simultaneously to minimize risk to the audio board.

Replace IC107 and IC207 which were AD712 with AD8512 which are nearly 10dB quieter and have comparable dc accuracy. The installation of the LPF described below cleans up everything above 10Hz from the 7805 used as a reference for these sources.

Remove R111 and R211 and replace with a combination of 110 ohm and 402 ohm Caddock MK-132 resistors, install the 402 ohm resistors closest to inverting inputs of the op-amps, from the middle of the two resistors connect the + terminal of a Black Gate 100uF FK, then connect the - terminal to the board star ground. a I cut the etch to R111/R211 furthest from the op-amps and installed the 402 ohm resistors on the topside in the locations previously occupied by R111 and R211. The caps and 110 ohm resistors were mounted on the bottom with the 110 ohm resistors soldered across the cut etch. The caps were connected between the two resistors and the adjacent analog ground. Improved HF decoupling from the supply is the intention of this change. 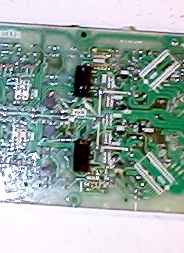 Please note that this is just the first round of modifications, there are other equally viable component choices that could have been made at least in some cases.

AD OP-AMP NOTE: Note that these are no longer marked with a dot at pin 1, orient them the same way as the original AD712.

Take your time and make sure all op-amps are correctly oriented before reinstalling the pcb.

Check and recheck all connections as very odd things happen when stuff is not plugged in.

Short the two lands next to the cover connector on the main pcb so you can load a disk and play it without the cover. Do a couple of voltage measurements to make sure all is working ok. Remember to clear these shorted lands before putting the cover back on! 16V supplies are short tolerant, unheatsunk monolithics less so, so be careful!

Comment on Riken resistors: There seems to be a wholesale rush to remove these wherever these are present, and frankly while the MK-132 does seem a bit more transparent, the original Riken resistors are quite good. If you are on a tight budget the op-amp upgrades, changing C327 to a BG FK, and changes to add an LPF to the current sources are the most indispensable mods listed.

As noted above all of the changes were made at once with one exception so I can't really say which ones had the largest effect. I think the player sounds smoother, much more detailed, has a greater sense of dynamics, is more transparent, neutral, quicker, and quieter. One other very noticeable difference is the elimination of a slight midrange glassiness that was subtle, but pervasive. (I attribute this to the BB2604 because I have heard this trait in other products where it was eliminated by replacing the chip in question with an LM4562.) The player is much more revealing overall without sounding more hifi in the process. Hopefully I will eventually be able to compare this unit to a stock player and more clearly describe what I think are audible worthwhile differences between this and a stock player.

I'll be honest and admit that I did not quite know what to expect, I half expected to "ruin" the house sound of this player which in mine was at worst very inoffensive, and often served the music quite well. I'm happy to report, that I can hear significant differences, and that they are all improvements in the basic player's performance. The overall cost of these mods was just under $200 and I would probably suggest the replacement of a few additional electroylitics with Black Gates for about another $20 or so. Parts came from Mouser (Caddock 10K resistors in bulk), Digikey (Op-amps), and Michael Percy. (Black Gate and Caddock MK-132 resistors)

I'm currently working on a design for a very low noise low voltage regulator for use in 5V, and 7V applications. Hopefully it will drop right in.

Back to SCD1 Mods Homepage