NO TOC Error Due To Sled Gear Train Binding

There are other causes for TOC read errors, but this one is common and may be the root cause of the problem if you can hear lots of noise during disk loading and unloading BEFORE or AFTER (not during) mechanism cover door movement.

Other possible causes include but are not limited to one of the two lasers failing, sled or tilt motor issues, and a spindle motor that is unable to maintain the high speeds required particularly for playing SACD disks.

Here is some information that might be useful if your player suffers from one of the many causes of the notorious "TOC Not Found" errors these players are known for. The specific issue addressed here is binding of the gears on their shafts in the sled drive train. The three gears are clearly visible at the top of the mechanism. 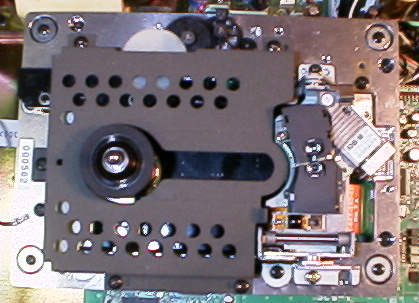 These are the three replaceable gears in the sled motor gear train:

4-968-864-01 Gear B Which is a combination helical cut gear on the bottom and straight cut on top. It also is part of the optical encoder that tells the micro-controller that the sled is in motion.

4-968-865-11 Gear C This was the problematic intermediate gear in my player. Replacing this gear solved my problem. The original fit very tightly on its shaft, the replacement has considerably more clearance. (The old gear was white, the new one black.)

3-364-731-01 The poly-slider washer used to keep the gears on their shafts. These are easily removed with just two small jewelers screw drivers - use one to separate the ends of the washer, use the other to ease the washer off of the retaining groove on the shaft.

Anyone who has already acquired a spare sled motor mechanism should try to get at least gears C and D.

Referring to p.57 of the Sony SCD-1 service manual do the following steps. Observe all static safe precautions while doing this repair work! IF you don't know what that means you probably should NOT be working on your player. First carefully remove the mechanism from the player. Remove the mechanism cover, all of the poly-slider washers, then gear D, then gear C, and finally gear B after removing the optical encoder assembly. Do not disturb the motor assembly unless replacing, and do not attempt to remove the helical cut gear on the motor without an improvised gear puller at minimum. Be very careful as this part is not currently available, and might never be again. (Sony Laredo apparently still has a stock of the assembly, but these are not available to the public for direct purchase.) Check all of the gears individually for binding on their shafts and replace any bad ones if possible, otherwise perform the modification described described here. Use the smallest metric drill bit possible that doesn't quite fit into the gear's bore, and carefully drive the gear down onto the bit by slowly twisting it onto the bit. Run the bit all the way through the gear. Be very careful as gear availability is sporadic, and there is no guarantee of future supply. When lubricating these gears, use a light teflon or silicone oil stated to be plastic safe. Apply only to the shaft. Watch makers and repairers amongst others often have suitable lubricants. Clean the shafts carefully with alcohol before lubricating with just a small amount of a "safe" oil and reinstall the gears in the reverse order, install the poly-slider washers, and finally the cover. Reconnect the flex cables and reinstall the mechanism. Sony does not recommend lubrication beyond what is described above, and I don't recommend lubricating the gear teeth as this will be a magnet for dust within the player and also as the lubricant dries out may result in increasing loads on the sled motor.

Using inappropriate lubricants may damage the gears. Certain lubricants may cause swelling of the plastic as it is absorbed, others may actually cause it to rot.

A properly running mechanism will be very quiet - certainly no louder than the tilt motor or other internal mechanisms. It should not be audible from more than a couple of feet away in the typical home listening environment.

Back to SCD1 Mods Homepage